National Geographic Year photo contest is one of my favorite contests where I can see many unbelievable photos that I can never imagine before. Wildlife category is always my top interest and below is some of the winning photos from that category I would like to share with you.

The first image about a timid orangutan wading through an Indonesian river to escape crocodiles beats out over 11,000 entries to take top prize at the 2017 National Geographic Nature Photographer of the Year contest. To take the photo, Photographer Jayaprakash Joghee Bojan of Singapore patiently waited for days to capture the image after learning of the orangutan’s unusual behavior. So determined to get the photo, Bojan actually risked his safety by entering into the crocodile infested river to wait for the orangutan to appear. 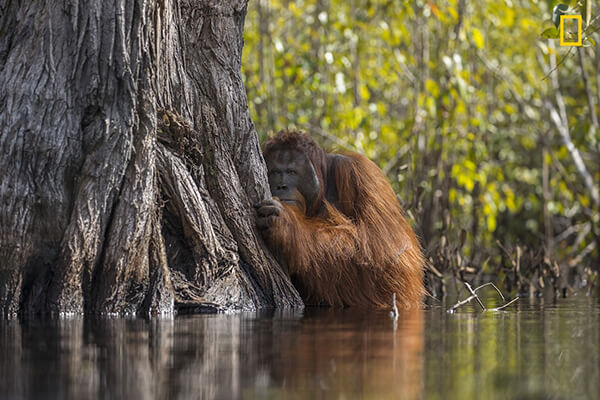 ‘Face to face in a river in Borneo’ by Jayaprakash Joghee Bojan, 2017 National Geographic Nature Photographer of the Year. Grand prize winner, 1st place, Wildlife. While looking for wild orangutans in Tanjung Puting National Park, Indonesia, we witnessed the amazing sight of this huge male crossing a river despite the fact there were crocodiles in the river. Rapid palm oil farming has depleted their habitat and when pushed to the edge, these intelligent creatures have learned to adapt to the changing landscape, This is proof considering orangutans hate water and never venture into a river. I got into the 5-feet deep river to get this perspective. 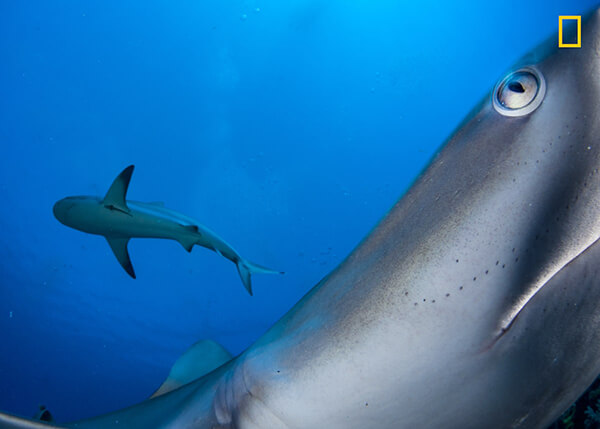 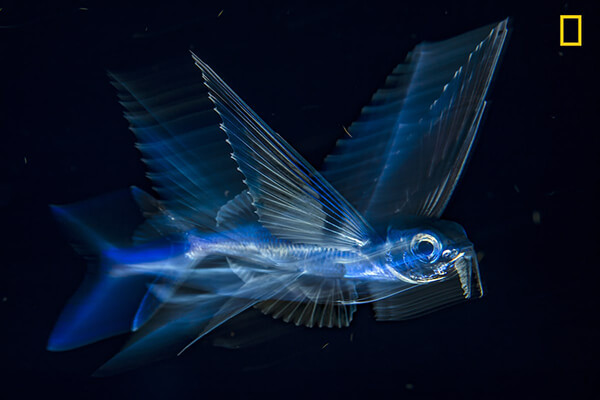 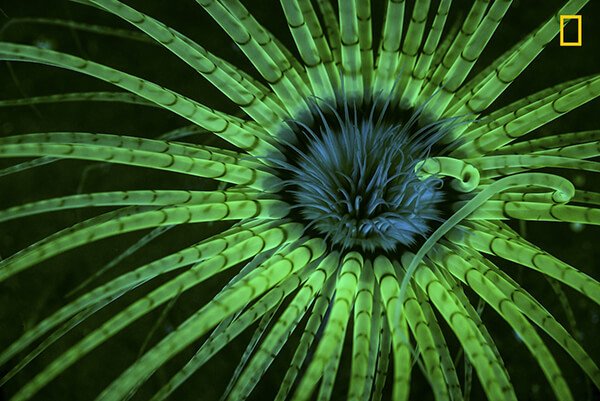 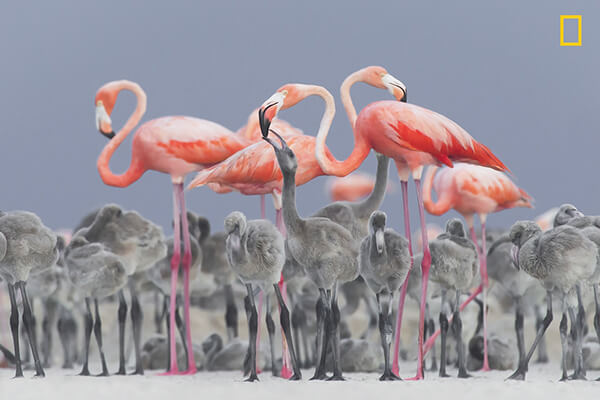 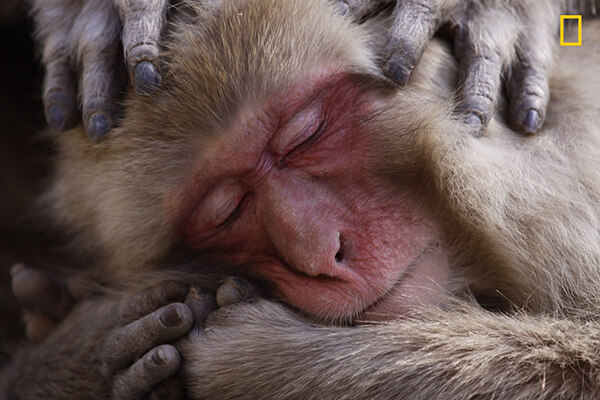 ‘Macaque Maintenance’ by Lance McMillan, 2017 National Geographic Nature Photographer of the Year. Honorable mention, Wildlife. A macaque being groomed at the Jigokudani snow monkey park in Japan. The Jigokudani snow monkey park has become a major tourist hot spot, attracting visitors from all over the world hoping to get a glimpse of these amazing creatures huddled together in hot springs. But because of the warmer than usual weather during this time, the macaques were frequently found lazing about on some nearby rocks instead of spending much of their time keeping warm in hot springs. 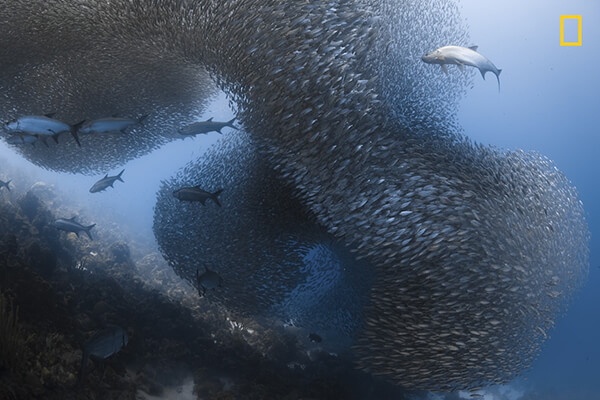 ‘Predators on a Bait Ball’ by Jennifer O’Neil, 2017 National Geographic Nature Photographer of the Year. Honorable mention, Underwater. Shot in Bonaire, this photo of tarpon hunting on a school of scad does not show the real predator lurking outside the shot. The real predator are the fishermen who were allowed to net this beautiful bait ball with the permission of the marine park. The netting practices need to be revised by the marine park and there needs to be more education for locals or pristine moments in the sea like this will not be here in another generation. 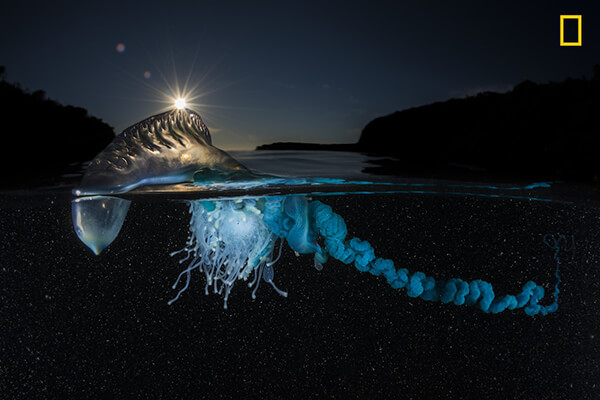 ‘Drift’ by Matthew Smith, 2017 National Geographic Nature Photographer of the Year. People’s Choice, Underwater. A Pacific man of war navigates close to the beach on a summers morning breeze. thousands of these nautical sailors end up washed up on australia’s east coast every summer. they are my favourite shade of blue. 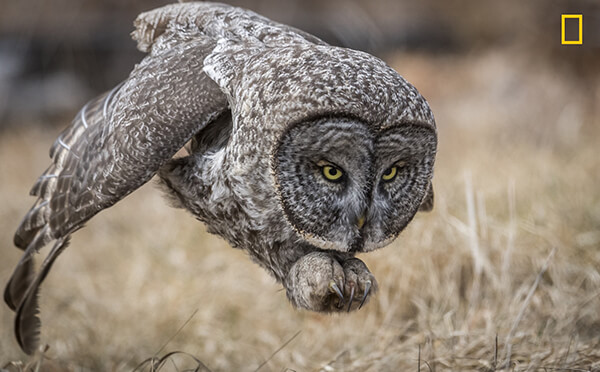 ‘Great Gray Owl’ by Harry Collins, 2017 National Geographic Nature Photographer of the Year. People’s Choice, Wildlife. A great gray owl hunting rodents in a field in New Hampshire, US. This bird was a rare visitor to this area and was worth the 7 1/2 hour drive to see it. The owl was not baited or called and this photo is during a natural hunt. Baiting has become a hot topic recently and it is very unfortunate that many people do it for the sake of a photo. With these owls in particular if you are patient enough you will see them hunt. They are not shy nor very intimidated by people.

7 Most Amazing Hot Spring in the world

“Heaven on Earth”, Dreamy Landscapes of Patagonia by Lukas Furlan