We know how much makeover can change someone’s looking and we might not know it does same thing to dog as well. In Photographer Grace Chon‘s interesting photo series “Hairy”, Chon explores how shampoo and scissor can change the looking of dogs. Moreover, Chon specifically focuses on Japanese-style grooming, which doesn’t follow the usual breed standard cuts and rules for grooming that we’re used to seeing. Rather, the emphasis is on making the dog look as adorable as possible. It is quite fun to see the before and after photos side by side. However, I am not quite sure some of the cuts make the dog more adorable and somehow, some of them look kindly unhappy to me. 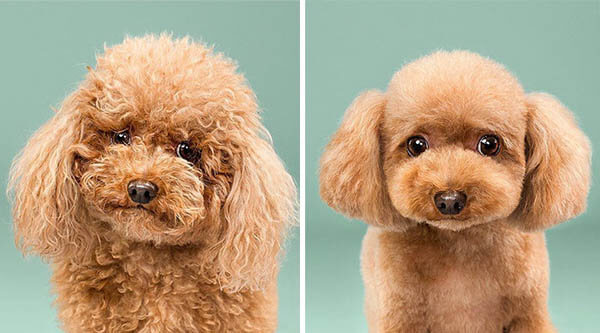 Herman: Before | After (Grooming: Cindy Reyes)

. Rocco: Before | After (Grooming: Patricia Sugihara)

Teddy: Before | After (Grooming: Donna Owens)

Yuki: Before | After (Grooming: Alyson Ogimachi)

Raider: Before | After (Grooming: Koko Fukaya)

Athena: Before | After (Grooming: Donna Owens)

Lana: Before | After (Grooming: Koko Fukaya)

Making A Family Portrait As A Perfect Home Decoration Piece