At times shadows can be a good thing and can accentuate the shapes of certain elements in the composition while giving them more depth. However in many cases shadows actually are far from ideal, and not only distracting but will obscure important parts of your shot.

That is why it is best to try to get rid of unwanted shadows, or at very least minimize their impact.

How To Avoid Shadows When Snapping Photos

It isn’t always easy to avoid shadows when you snap photos – but it is important that you try. Ideally you should survey the scene that you intend to capture beforehand and identify the shadows that are in it.

From there you can decide which shadows you want to avoid, and how to eliminate them from your shot.

In order to avoid shadows there are a few methods that can prove useful when capturing photos:

Make no mistake there is no ‘one size fits all’ solution to avoid shadows completely, and you will need to adapt depending on the situation. That can take a bit of trial and error, especially the first few times that you make an attempt.

In some cases one of the methods described above may work best, while in others you may want to use a combination of them.

How to Remove Shadows in PhotoWorks

Despite your best efforts some unwanted shadows may still show up in your photos – either accidentally, or because it was not possible to avoid them. The good news is that in many cases the shadows can be removed by editing them out.

One of the easiest ways to remove shadow from photo is by using PhotoWorks. More specifically you will want to try its Healing Brush tool that can remove any unwanted elements seamlessly from your shots.

The Healing Brush itself can be found under PhotoWorks’ Retouch tab. Once it has been selected, you just need to use it to paint over the shadows that you want removed.

If you want more control you could adjust the Healing Brush settings in the side bar. The Size setting is particularly useful as it will let you reduce the size of the brush so that you can paint over the shadow more precisely.

Although this method is effective in most cases, it works best when the background is simple.

Other tools in PhotoWorks may be able to help you remove shadows as well. For example the Crop feature could help you to crop out any shadows that are near the edge of your photos, while the Clone Stamp will let you remove shadows on more complex backgrounds.

Some features such as tone adjustments may help in very specific cases as well, not so much to remove the shadows but to reduce their contrast. 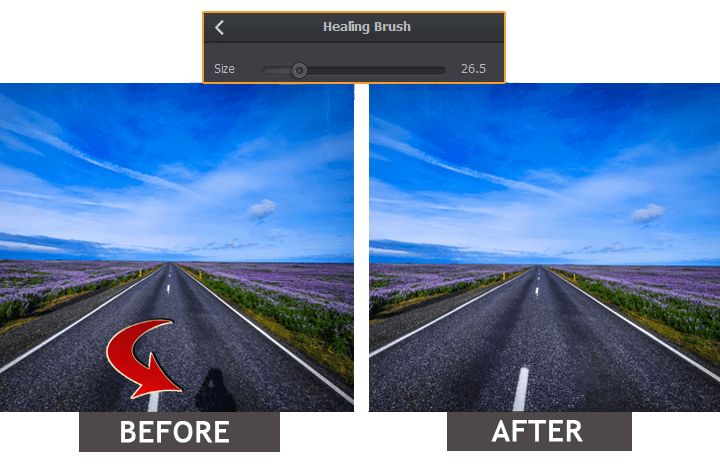 All in all the ‘best’ way to deal with shadows is to try to avoid or minimize them when you first snap your photos, and then get rid of whatever remains by editing them out.

Now that you know how to do both, you should be able to exert more control over the shadows that are in your photos. At the end of the day your goal should be to benefit from the depth and contrast that shadows can provide, but not let them get in the way or act as a distraction.