If you are bored of thousands piece of tiny puzzles or just want to try something differently, you can actually 3D puzzles. 3D puzzles provides another type of enjoyment. Instead of working on surface, you work in space. Playing like an architect instead of painter, your final work can stand by itself and make the display more easier. Those 3D puzzles like Eiffel Tower or Hogwarts Astronomy Tower are cool but is not what we want talk today. We want to show you the playful demolition puzzles from a Japanese company called, Megahouse. These sets contains no more than 50 pieces and after assemble them correctly, you will be able to know some inner structure of the food we usually eat.

For now, there are 5 sets: tuna, pig, cow, chicken and snow crab. You can even “cook” some of them. For example the cow puzzle, when you touch the various pieces, they change color from rare to medium rare to well done! Pretty cool right? Use the link below to find which animal you want to know about mostly.

It is the appearance of a puzzle that understands the part of tuna. Parts that are popular with sushi material such as large toro and medium toro “Kami” “Naka” “Shimono” Of course, even rare parts that If you use the included tuna kitchen knife part and chopping board sheet you can decorate the tuna disassembly show feeling UP! If you use the display stand you can also decorate it as a tuna model. 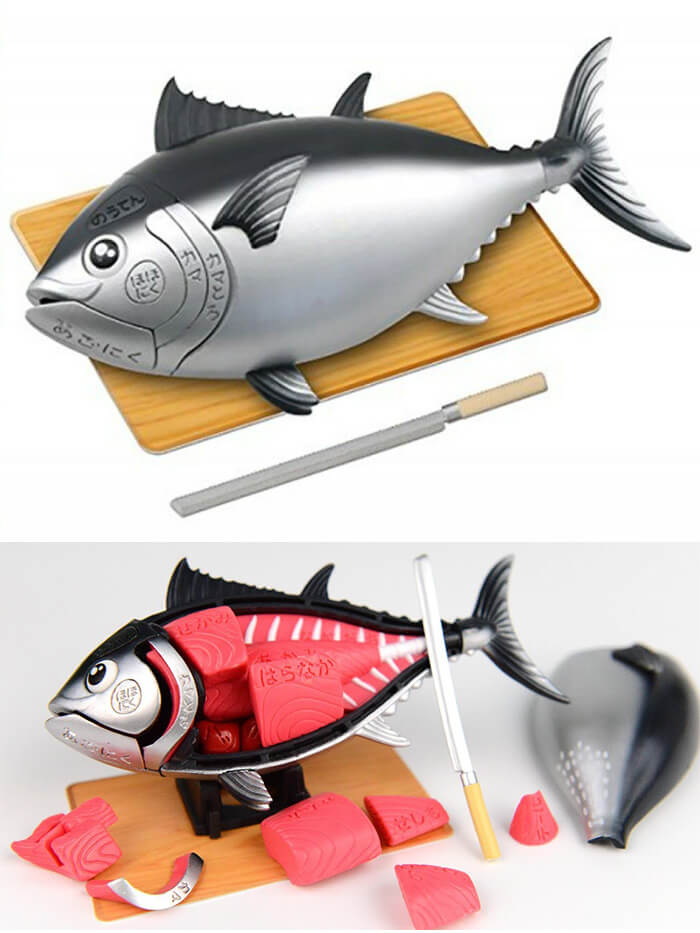 Learn about the various parts of the pig that make up the meat we all like to eat by taking apart the detailed and colorful model, which features 42 individual pieces. While it might sound and look morbid to some, youngsters will be amazed at all the parts and acquire a whole new appreciation for pigs! 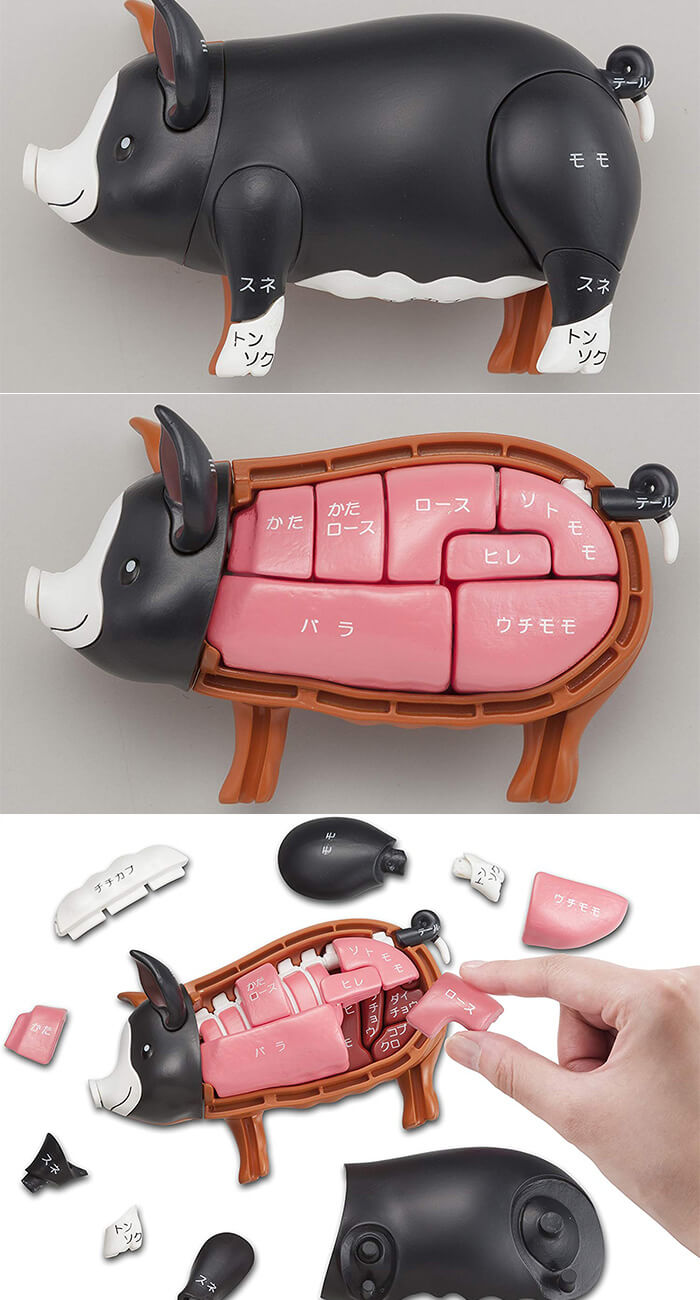 The 3D Cow Dissection Puzzle features 37 parts, all named in easy-to-read katakana characters and in different colors to indicate if they are standard cuts, entrails, or bones. Put them together and you have a full bull that you can display on the included plate. And to really whet your appetite, when you touch the various pieces, they change color from rare to medium rare to well done! Choose what you want to “cook” according to your taste, lay them out, and learn important details about the anatomy of a cow that will give you a whole new respect for beef and meat. The only thing better than this is an actual BBQ! 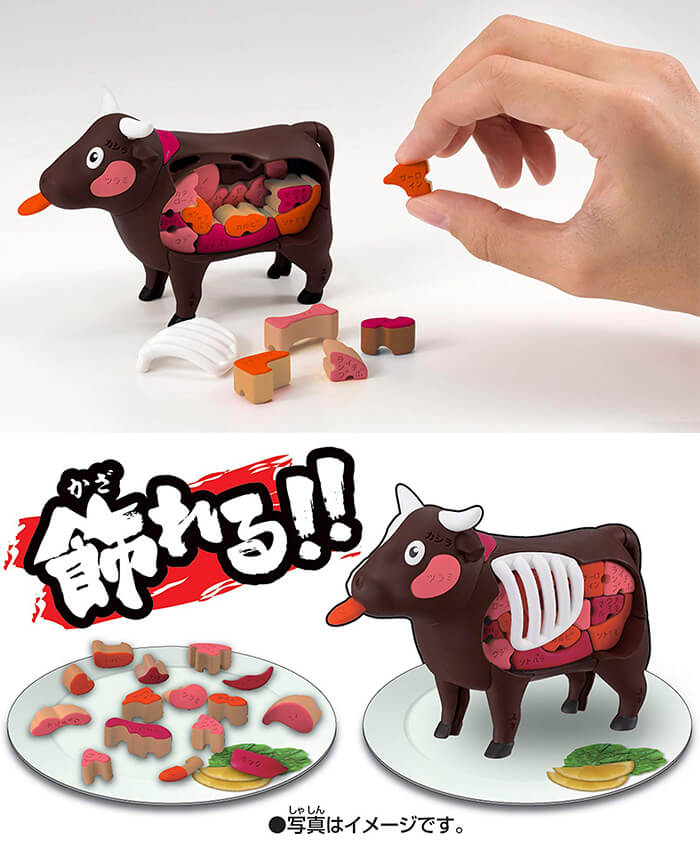 The realistic toy lets you get a close look at the inside workings of this familiar bird, learning about its organs and body parts. This is a great game for kids and older players, teaching them basic anatomy and zoology. The chicken can be arranged into “before” and “after” versions: the regular “living” bird and then in its food form as a roast chicken dish on a plate. There is even a skewer and various meat parts included in the set of 38 pieces. 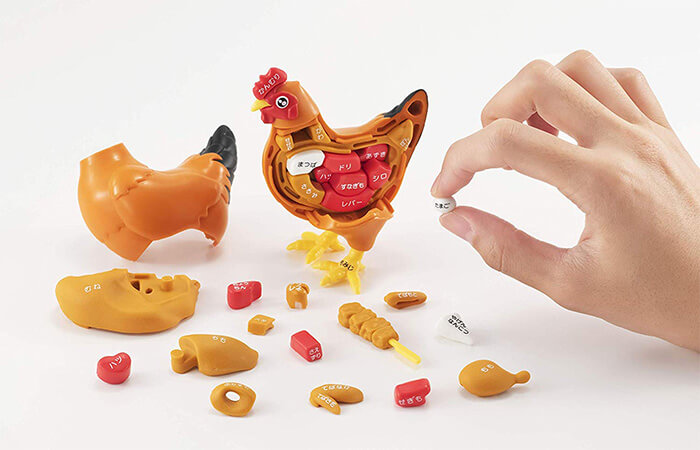 Large, red, and very delicious, the snow crab (zuwaigani) is one of the pinnacles of Japanese cuisine. Now Megahouse has added the visually striking crustacean to its popular series of 3D “dissection puzzle” toys. The 3D Japanese Snow Crab Dissection Puzzle is a realistic and detailed toy that allows you to take apart the crab. It’s a fun activity for someone alone or as a group game, and it also helps you learn about animal anatomy as well as cooking! The puzzle has 41 different parts. Can you figure out how they come apart and fit together? 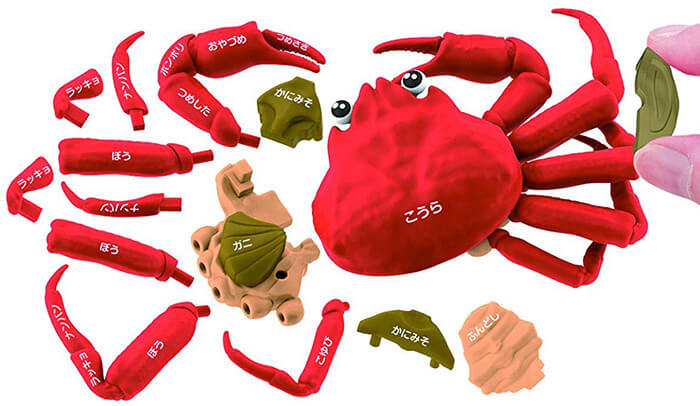 A Scratching Laptop Especially for Your Cat