Awards and trophies throughout history have been designed in such a way that they exemplify the stature of the event for which they are awarded. Then again, some trophies are created as interior wall design motifs. This article highlights trophies that have long histories in their respective sports or events (America’s Cup, Stanley Cup, Wimbledon Trophy, FIFA World Cup), as well as other trophies or awards that have been designed more recently in relative history to acknowledge top achievers in their respective sports or events (PCA Trophies, Biletnikoff Award).

Each and every one of these trophies and awards has its own unique, interesting and beautiful design that is immediately recognizable for the sport or event it represents. 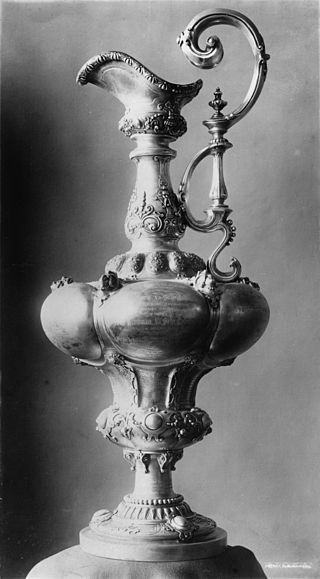 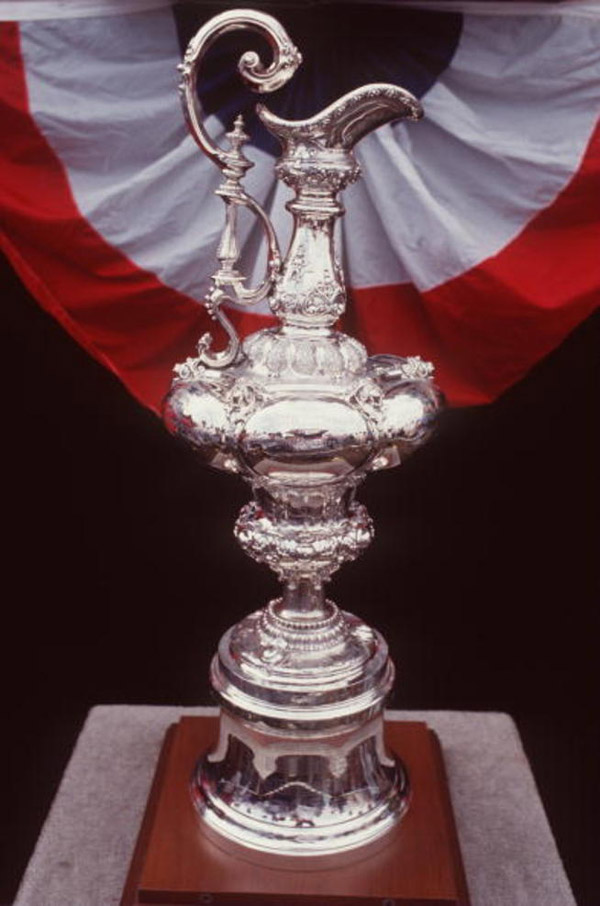 The America’s Cup is a bottomless ewer made of ornate sterling silver. Crafted in 1848 by Garrand & Co., it is one of several off-the-shelf trophies of its time by this maker. The trophy was bought and donated for the Royal Yacht Squadron’s 1851 Annual Regatta around the Isle of Wight by Henry William Paget, the 1st Marquess of Anglesey. The trophy was won by the schooner called America, after which the Cup was renamed and donated to the New York Yacht Club for perpetual international competition. Standing for a cup of a hundred GB Pounds or sovereigns in value, the cup was originally known as the R.Y.S. £100 Cup. The cup is inscribed with the names of the yachts that have competed for it. To accommodate more names, the Cup has been modified twice by adding matching bases. 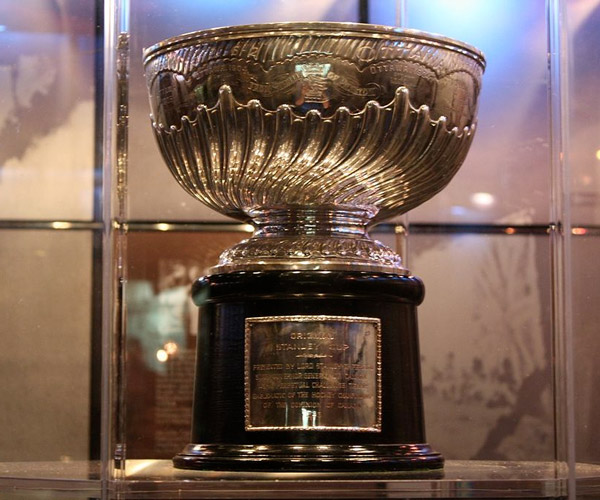 This is a championship trophy awarded to the National Hockey League annually to the playoff winner upon the conclusion of the Stanley Cup Finals. Three Stanley Cups actually exist. The first is the original bowl of the Dominion Hockey Challenge Cup. The second is the authenticated Presentation Cup. The third is the Replica Cup at the Hall of Fame. Though the National Hockey League does not own the actual trophy, it does maintain effective control over the trophy and its associated trademarks. The original bowl was 18.5 centimeters in height, 29 centimeters in diameter, and made of silver. The current Stanley Cup is topped with a copy of the original bowl. However, it is made of a silver and nickel alloy. The total height is 89.54 centimeters and it weighs 15.5 kilograms. 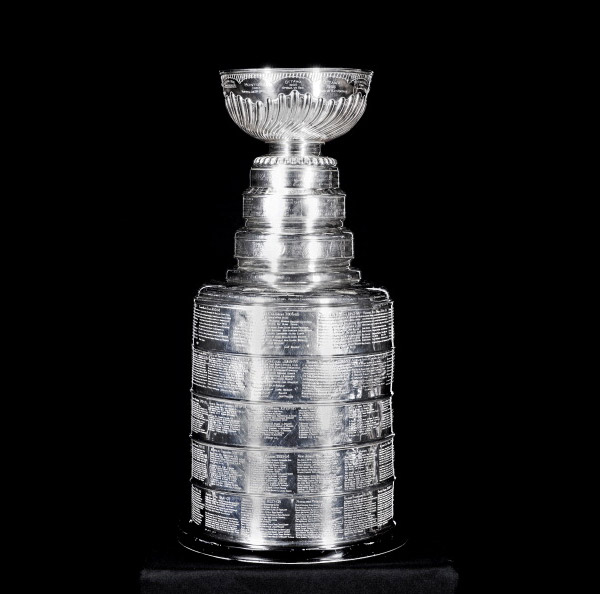 A new Stanley Cup is not made each year, which is unlike many other trophies awarded by major professional sports leagues in North America. Instead, winners keep the trophy until a new champion is named. Another peculiarity of the trophy is it has a chalice engraved with all the names of the winning players, coaches, management, and club staff. Each year a new band got added, which caused the size of the trophy to grow to such a degree it earned the nickname Stovepipe Cup. Designed with a five-band barrel, the 1958 modern one-piece Cup could contain thirteen winning teams per band. The oldest band gets removed when the bottom band is full. This prevents the Stanley Cup from growing and at the same time preserves the removed bands in the Hockey Hall of Fame. A new blank band is then added at the bottom.

The Stanley Cup has been referred to by other names as well, including The Cup, The Holy Grail, and Lord Stanley’s Cup. Sportswriters will sometimes facetiously call it the Lord Stanley’s Mug. One of the oldest traditions surrounding the Stanley Cup is the celebratory drinking of champagne from the cup by the winning team. 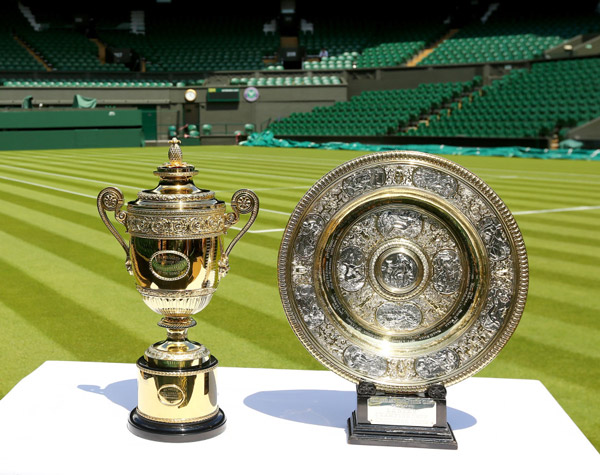 The oldest professional tennis tournament in the world is at Wimbledon. The crown of the Wimbledon Championship for men, or Gentlemen, is the Wimbledon Cup, while the women, or Ladies, receive the Rosewater Dish. The Wimbledon began in 1877 for Gentlemen only. Ladies singles did not begin until 1884. 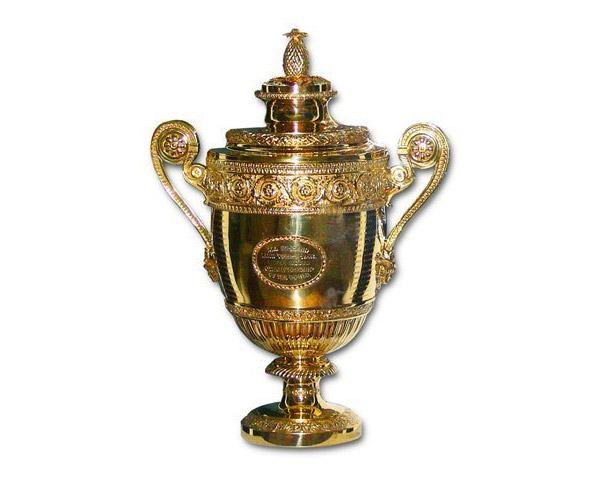 The men’s singles trophy is a silver gilt cup and cover. This trophy for the Gentlemen is presented by the All England Club and is inscribed with the words, “The All England Lawn Tennis Club Single Handed Championship of the World.” The Cup has a diameter of 7.5 inches and is 18.5 inches tall. It has a raised foot and two handles on opposite sides from one another. On top of the head of the Cup is a pineapple covered with a helmet, which is present also under each handle. The bowl of the cup is beautifully decorated with oval style moldings, floral work, and borders. Wimbledon champions no longer receive the actual trophy; they are provided with a miniature replica that stands about 8.5 inches tall. 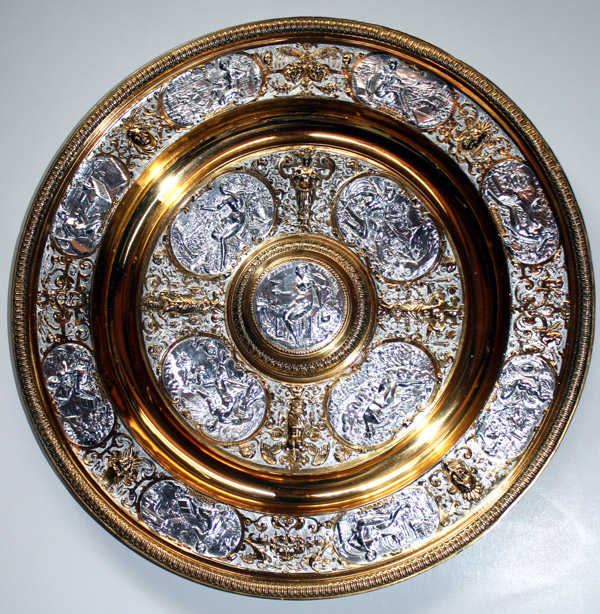 The Ladies Single Championship award is a silver tray that is also known as the Rosewater Dish or the Venus Rosewater Dish. It was won for the first time in 1886. The dish has a diameter of 18.5 inches with the tray being made of silver that is partly gilded. There is a beautiful design in the center of the trophy. It is surrounded by four reserves that spread out to the rim. Gilt renaissance patterns and motifs make up the rest of the tray design. The trophy has a main theme that is mythological. The center figure of the trophy is Temperance seated on a chest. In her right hand is a lamp and in her left hand a jug. She is surrounded by attributes like a fork, caduceus, and a sickle. The four reserves contain figures of classical Gods. Minerva is shown on the tray’s rim controlling the literal arts. These are Astrology, Geometry, Arithmetic, Music, Rhetoric, Dialectic, and Grammar. Winners of the Ladies Single Championship receive a miniature replica of the trophy that is about 8 inches in diameter.

This is the most sought after and widely recognized sporting prize in the world. The FIFA World Cup Trophy holds a universal appeal unique to the sport of football. The first generation of this trophy was named the Jules Rimet Cup in 1946. It honored the founding father of the FIFA World Cup and was commissioned by FIFA from the French sculptor Abel Lafleur. The trophy was produced in gold, had a base of semi-precious stones, and depicted the goddess of victory holding an octagonal vessel above her head.

To this day the original trophy is lost, an unsolved mystery after it was stolen in Rio de Janeiro and is believed to have been melted down by the thieves. In 1970 FIFA commissioned a new trophy because under FIFA regulations any nation winning the Cup three times became the permanent owner. In 1970 Brazil accomplished this feat and made the Trophy their own. 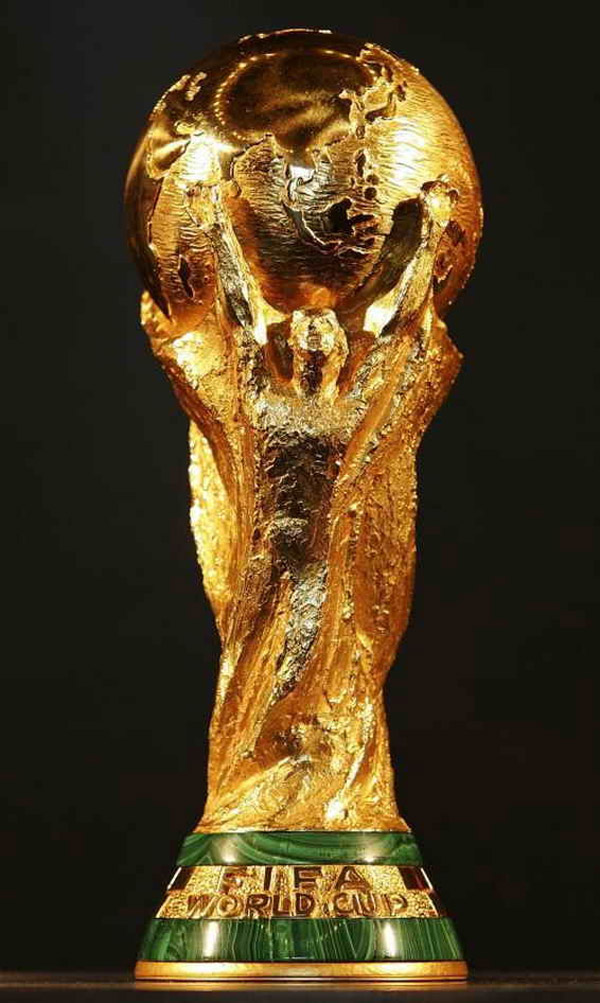 The new trophy was for the tenth FIFA World Cup of 1974. Experts from seven countries submitted fifty-three designs to FIFA. The design by Italian artist Silvio Gazzangia was ultimately chosen as the new Trophy. The artist described his design as follows, “The lines spring out from the base, rising in spirals, stretching out to receive the world. From the remarkable dynamic tensions of the compact body of the sculpture rise the figures of two athletes at the stirring moment of victory.” The authentic FIFA World Cup Trophy measures 14.5 inches in height and weighs 13.61 pounds. It is made of 18-carat gold and the base contains two layers of semi-precious malachite. Winners of the FIFA World Cup are awarded a gold-plated replica that is referred to as the FIFA World Cup Winners’ Trophy. 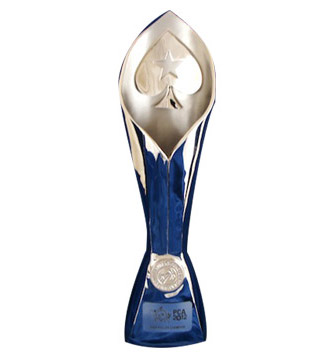 These are a set of custom-made trophies by Bennett Awards with a unique design developed specifically for the PokerStars Caribbean Adventure (PCA) tournament. This is the largest poker tournament held outside the USA and is the premier live event of PokerStars.

The custom design of the PCA trophies exemplifies the stature of the event, featuring a unique, recognizable, elongated trophy cup. This particular design is based loosely on the shape of a spade, which of course is a key element in poker. The back surface of the cup is revealed due to the front of the cup being cut lower than the back. This is a unique design that allows a 3D image based upon the PokerStars logo to be seen on the back surface. A medallion with a raised image of the PCA logo is located on the lower section of the cup. A customized plate with the award name and PCA logo is below the logo medallion. This particular award stands about twenty inches tall, is cast in pewter, and features a finish that is a combination of brushed pewter and silver plate. 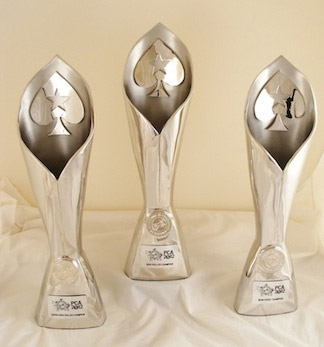 In addition to this PCA award, other achievement trophies have been produced by Bennett Awards based upon this same design. The first three were created for overall winners of certain main PCA events, while the fourth trophy is a perpetual award for the Main Event of the tournament. The latter trophy is mounted on an eight inch pyramid-shaped black hardwood perpetual base with custom engraved plates. 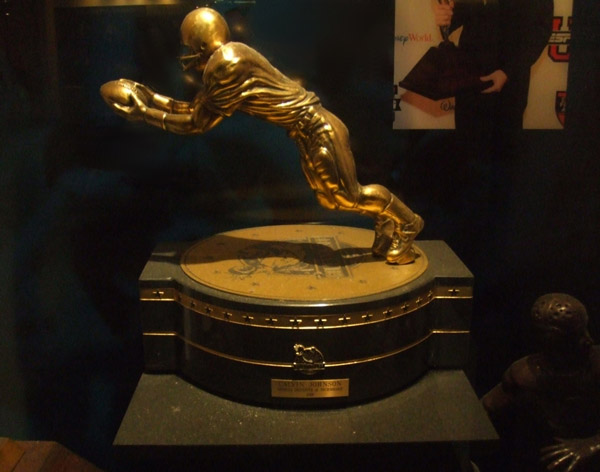 This trophy was designed specifically for annual presentation to the nation’s outstanding college football receiver. The trophy was named after former NFL and Oakland Raiders wide receiver Fred Biletnikoff, making it known as the Biletnikoff Award. Bowling Green State University alumnus and Perrysburg native Jeff Artz were placed in charge by a newly established quarterback club, the Tallahassee Quarterback Club Foundation, to create this award that had never existed before and was intended for the nation’s top receiver.

The gold and bronze trophy is of a receiver catching a football standing on top of a heavy base. The base is made of black onyx stone. First presented in 1994 to former Penn State receiver Bobby Engram, other past winners of the Biletnikoff Award include Randy Moss, Braylon Edwards, and Calvin Johnson. Winners of the award are voted on by members of the media.

How to Choose the Perfect Wine Gift

1 thought on “World’s Most Beautiful Awards and Trophies, Past and Present”