Sodas and other beverages made for the Asian market can often seem strange to us in the Western world. I guess due to different dieting habit and culture, whatever may seem like an odd flavor to us is often very popular there.

From “Wasabi drink” to “cheese drink“, here are some strange Asian beverages you may not have heard of. You might think how the hell those terrifying drink has been made in market… However, look on the bright side, though: they may not be good to drink, but you can’t say they’re not good for a laugh.

Because Japan is an island nation, it has been historically hard to support a large dairy industry because of the limited amount of available land. Therefore, many Japanese people have never developed much of a taste for milk products. Today, however, some companies are hoping to introduce more dairy into the Japanese marketplace.

This new cheese drink comes in 3 different flavors; plain, blueberry, and yuzu citrus. They use a special process to cut down on the sweet taste of the flavored drinks. It is said to have a taste similar to yogurt, but with a cheesy aftertaste. 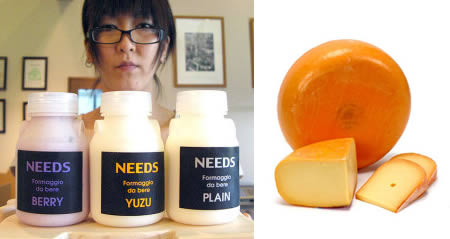 Now here’s a marketing hit: a nonalcoholic “beer” for kids that’s selling like crazy.
The beverage, whose main ingredient is the Latin American plant Guarana, sells for around 380 yen per 330-milliliter bottle.

The bottles themselves are colored brown to make the drink look even more like its more potent ounterpart. 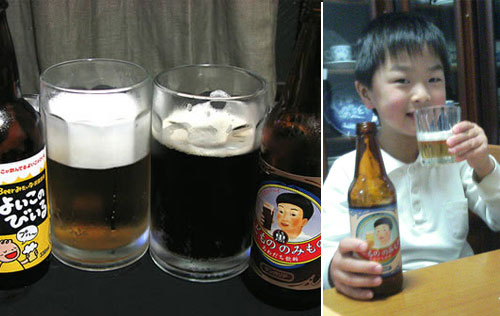 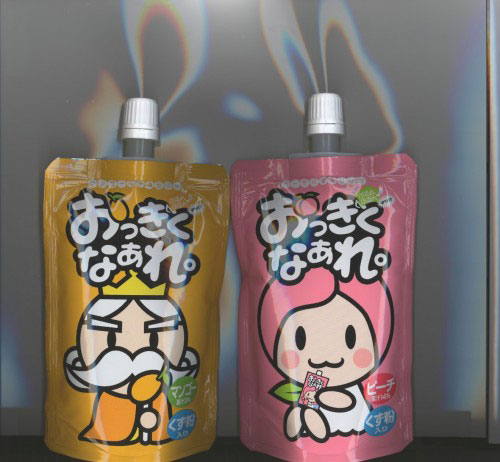 Kimchi is a traditional Korean side dish composed mainly of fermented spicy cabbage. The Kimchee Drink is the packaged, cloudy juice left from the fermentation process. 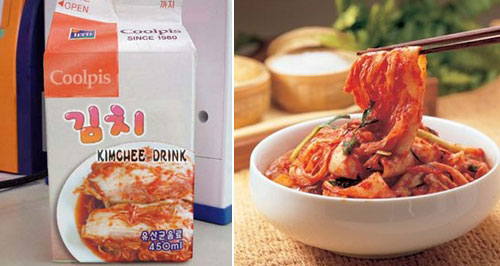 Ramune is a popular Japanese soda that is usually fruit flavored, and is recognized by its unique bottle shape and glass bead stopper. However, Ramune also makes two strongly flavored sodas: Curry and Wasabi.

Wasabi [wiki], if you ever ate sushi, you will know this spicy green things for sure…But drink that? OMG! That is just as crazy as drink the Kimchee Drink above… 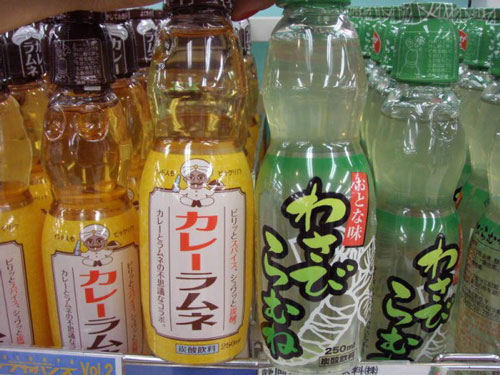 If you’ve ever gotten the urge to stir some yogurt into your Pepsi, well, you’re lucky to be alive because we’re pretty sure that shit will make your stomach explode. So who would think to combine those two things and sell them commercially? Japan. Pepsi White emerged there last October just in time for their line of winter products. Because nothing screams “winter” like yogurt. Because it’s white. 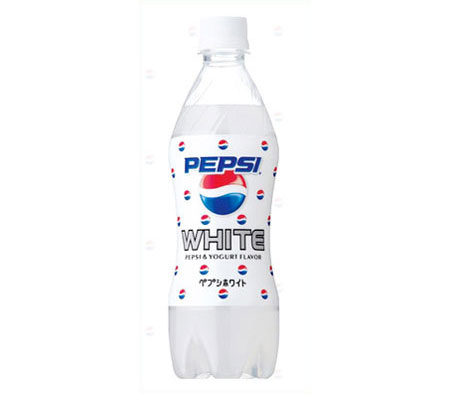 Pepsi Ice Cucumber is a cola of fresh taste balanced with an exquisite stimulus of the carbonic acid with a cucumber flavor, a cola which is dimly fragrant, emerald green with a rush of coolness. 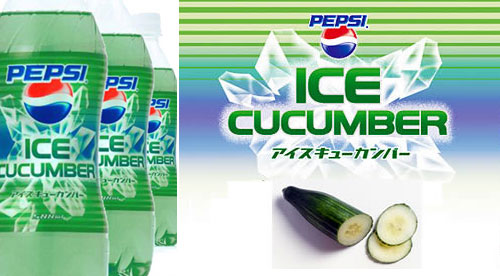 Water Salad is… well… salad-flavored water. You know, the stuff you get after centrifuging your rinsed romaine in the salad spinner. Funny, we pour it down the drain here; in Japan they can it and put it up for sale in a varied selection of flavors. 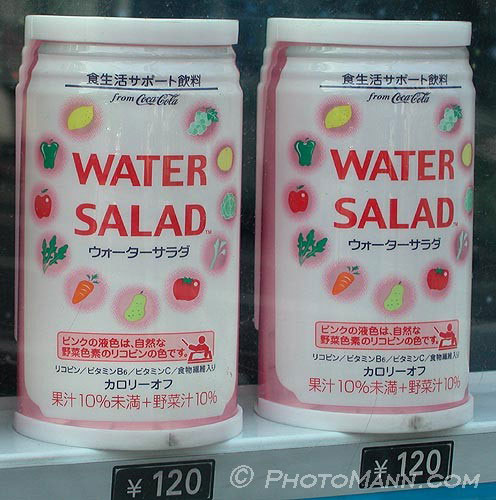 I shudder to think of the scene inside one of the manufacturer’s factories… those poor farm girls, milkmaids or what have you, shackled up to cold, pitiless machines that never, ever stop… and then I woke up. 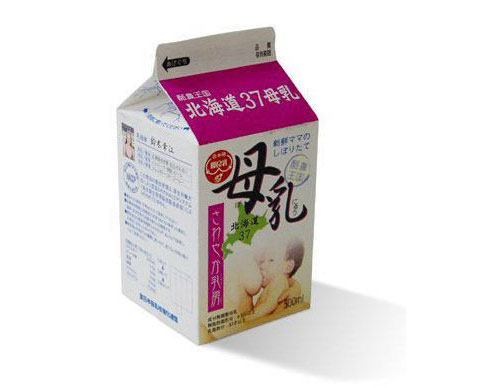 70% beer, 30% milk, 100% disgusting. Supposedly, Bilk possesses a subtle sweetness that women should find most appealing. Beer bellies, belches and lactose intolerance, not so much. Bilk can be bought at 6 outlets in Japan’s northern province of Hokkaido where bears outnumber humans 2:1. Guess they like the stuff, for their pic-a-nic baskets and all. 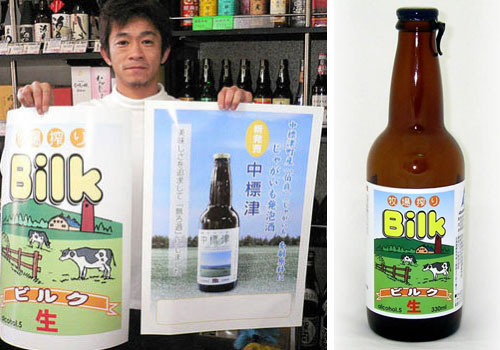 Made with swine placenta, the drink carries the automotive-sounding name of “Placenta 400000” – perhaps it’s made from the ground & pressed extract of 400,000 placentas? Nihon Shokuten’s not telling, but their revolting beverage should come pre-packaged with mints because there’s nothing worse than placenta-breath in the morning. 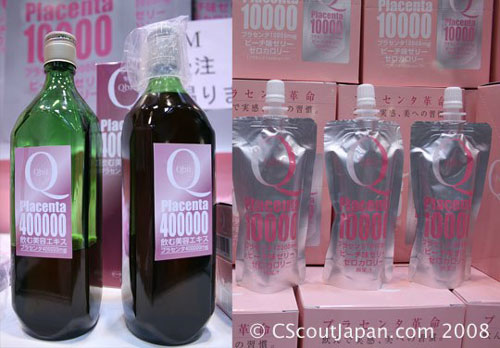 Unagi-Nobori soda is no ordinary energy drink, oh no… this terrific tonic is infused with a generous helping of eel extract. If you think there’s something fishy about that, you’re unfortunately right.

Unagi Nobori bottles essence of eel along with 5 essential vitamins in a carbonated medium. 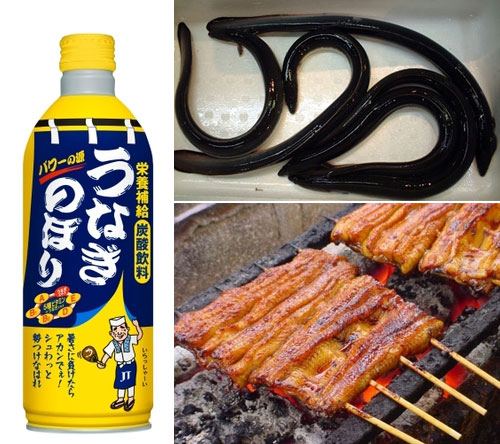 Shop With Ease At Temu With Its Purchase Protection Program

Volet végétal: a Creative Plant Holder for People Live without Gardens and Balcony