It is amazing how many creative artworks exist and we are totally unaware. Mona Lisa, a famous portrait painted by Leonardo da Vinci in the 16th century, is probably the richest in replicas and reproductions all over the world. I am to list 12 Amazingly Unique/Creative Mona Lisa Reproductions – And those depicted not on paper.

I guess sausage art is now really popular in Russia, with cool edible artwork like the Mona Lisa pictured here. Now, I am guessing they should do this except make a pizza, that’d be really popular in the U.S. And that is totally edible and designed for eating… 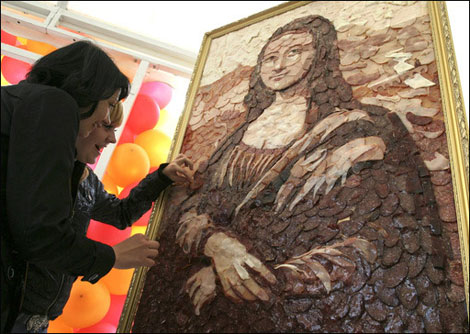 An unexpected tribute to Leonardo da Vinci’s incomparable work of art lies in the lobby of PC maker Asus’ headquarters in Taiwan. It’s a Mona Lisa collage created from old motherboards and computer chips. It’s no patch on the real thing but is still an amazing work of geek art.

Asus designers reportedly dreamed up this Mona Lisa. The work represents two things: a reminder of the technology that Asus built its fortune on and the company’s ethos to encourage and support “any kind of crazy ideas.” 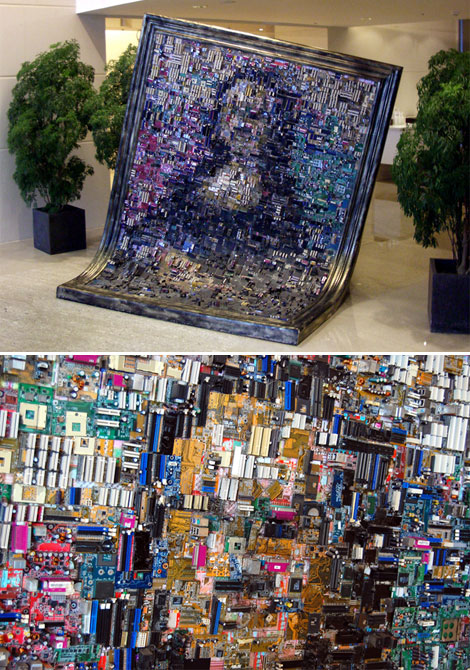 New York artist, Devorah Sperber deconstructs familiar images to address the way the brain processes visual information versus the way we think we see. Using ordinary spools of thread, Sperber creates pixelated, inverted images of masterpieces, which appear as colorful abstractions to the naked eye. When viewed with optical devices, however, the works becomes immediately recognizable as the famous paintings, like Mona Lisa

The thread spools works are hung upside down in reference to the fact that the lens of the eye projects an inverted image of the world onto the retina, which is corrected by the brain. 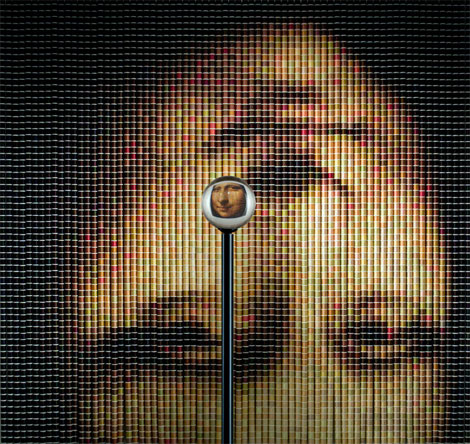 The work by Eric Harshbarger, completed in November 2000, is entitled “Mona Lego.” It uses the standard Lego “primary” colors: red, green, blue, yellow, white and black and is composed of over 30,000 blocks, measuring six by eight feet, and weighing over 45 pounds.

This artwork was created by planting different varieties of rice, including the purple and yellow-leafed Kodaimai rice and the green-leafed tsugaru-roman variety. Amazing! 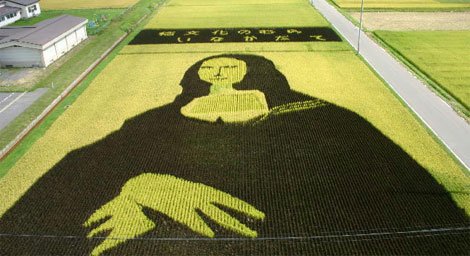 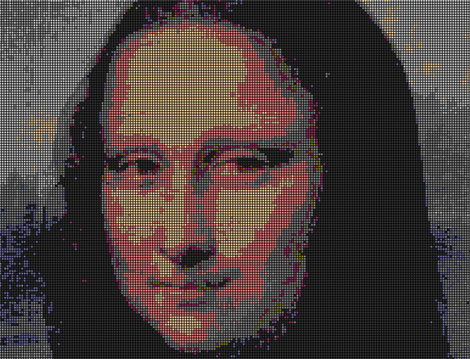 Since 1997, Red Bull has held a competition in various cities to see what people come up with for art using Red Bull cans. The final works of art for some of these are pretty cool, escpecially this Mona Lisa, the best red bull art I’ve ever seen 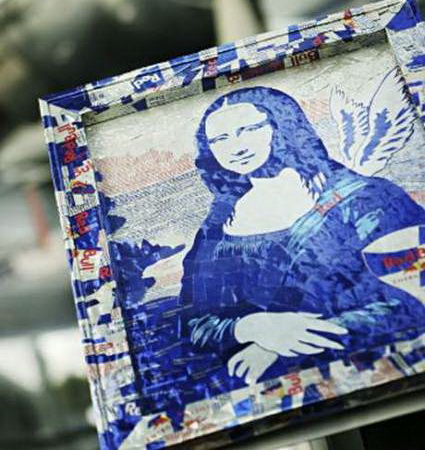 Monalisa made with bread toasties, which was displayed at Food and Drink Expo 2006, Birmingham. 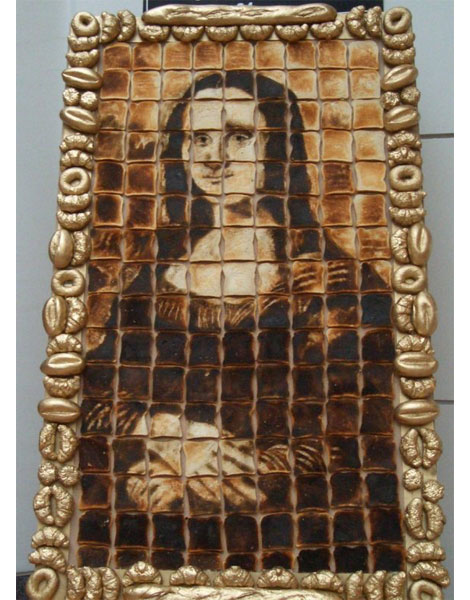 Back in July, at the Aroma Festival at The Rocks in Sydney, Australia (an annual coffee festival), organizers used 3,604 cups of coffee — four shades using different amounts of coffee and milk — to make a replica of Leonardo da Vinci’s Mona Lisa. 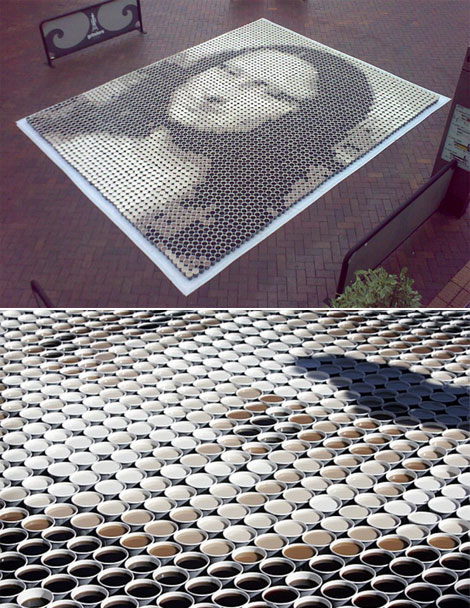 JuDuoQi is a Chinese Designer. Her newest work “Vegetable Museum” is exhibited in Paris-Beijing Photo Gallery in Jan, 2009. In The Vegetal Museum series, she revisits in a stunning way some masterpieces of the western painting. Making use of vegetables and food of China’s everyday life – tofu, cabbage, ginger, lotus roots, coriander, sweet potato… – and through digital manipulation, she presents a puzzling series of vegetable compositions representing world famous paintings like Mona Lisa. 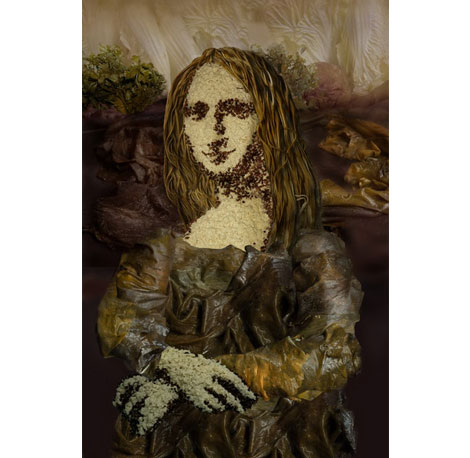 A magnifying glass shows individual pictures forming a mosaic image of the Mona Lisa on a jigsaw puzzle at the International Tokyo Toy Show 2009. The puzzle comprises of masterpieces printed on what the company says is the world’s smallest sized 1,000-pieced puzzle 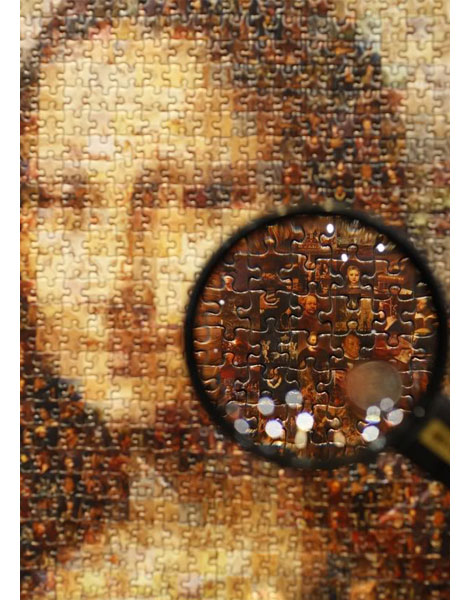 Created over three months by the employees of the Takashimaya department store in Japan, this Mona Lisa recreation (among other pieces) is made entirely of recycled train tickets. Over 320,000 old tickets were used to recreate the Da Vinci masterpieces of The Mona Lisa, The Birth Of Venus, and Renoir’s Dance At The Moulin De La Galette.

Nice use of recyclables! 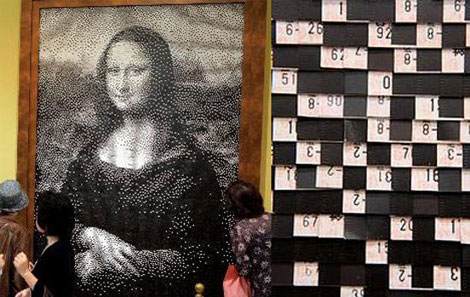 If the wind had a face, what would it look like?

Forever Rose: the Rose Stands At Least 3 Years With Water or Sunlight