There are various kinds of pets in our world, cat,dog,fish,bunny,birds or SPIDER! Yes, spider! Somehow, it is difficult for me to think to raise a spider like a pet. But you can see they are sold in the pets shops (where I got shocked at the first place). Those flurry, 6 eyes, 8 legs creatures. However, you know what, after I see this small guy (the first picture below), I just found them are not that ugly. Or at least, not all of them are ugly. After doing some research on internet…I do find some interesting spider species.

THE GREEN JUMPING SPIDER
Also known as the Clown Spider and Northern Green Jumping Spider. It is a mormon!! lol.
Its eyes are so cute, what he/she tries to express? 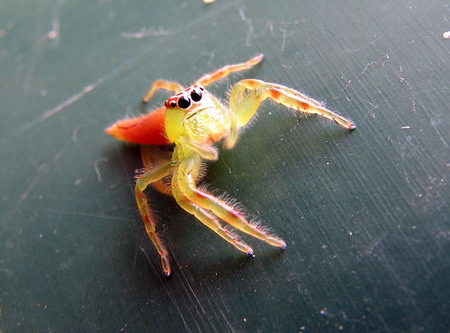 Wolf Spiders are hunters they don’t use webs to catch their prey (possibly the reason they are called “wolf” spiders).They prey on smaller insects and spiders. Wolf spiders are very low on the aggressive scale unless you try to handle them. 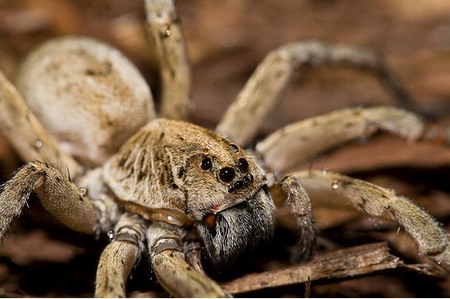 White Crab Spider also known as White Flower Spider. The spiders also hide in the flower plants and their abdomen just look like the flower buds. At day time they rest in their retreats made by the leafs and their silk. At night they sit beside the flower and wait for the visitors, such as the small moths. 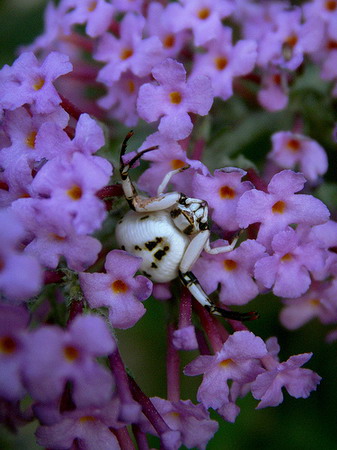 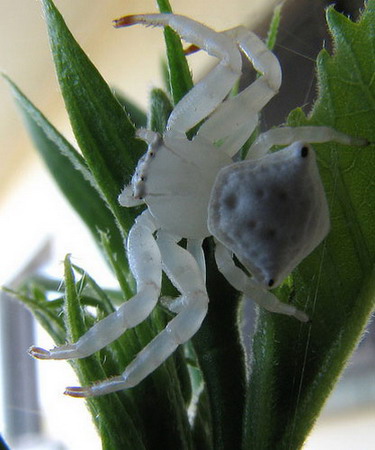 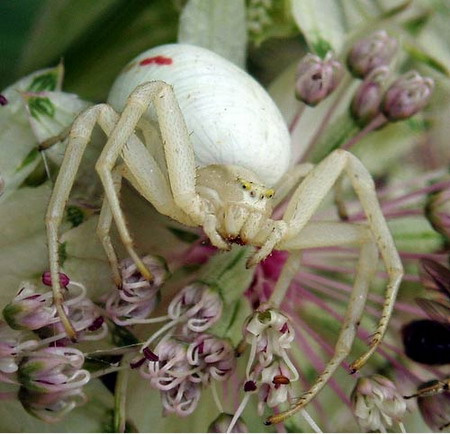 The long-jawed orb weavers or long jawed spiders are elongated spiders with long legs and chelicerae.
The spiders are orb web weavers, weaving small orb webs with an open hub and few, wide-set radii and spirals. The webs have no signal line and no retreat. Some species are often found in long vegetation near water. 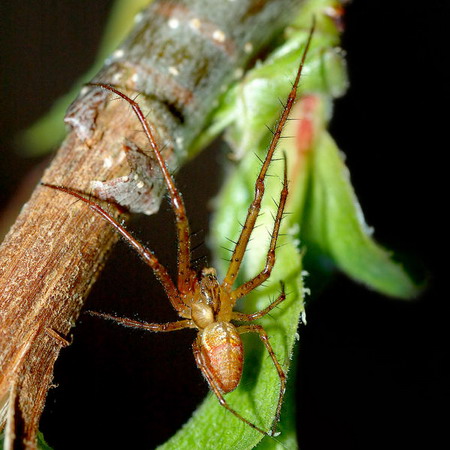 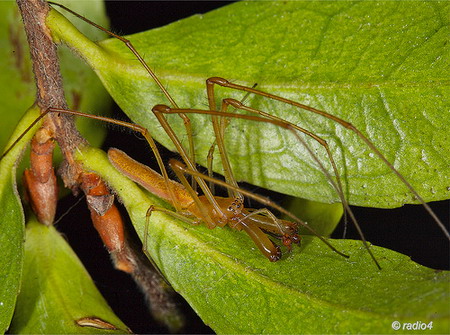 A female, southern Black Widow, Latrodectus mactans, guards her egg sac. These venomous spiders can be found throughout Arkansas. Though it very rarely happens, their bite can kill a human. 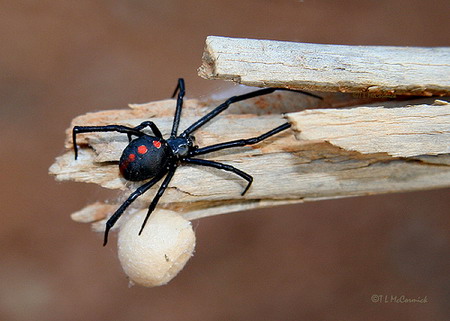 They live in trees and shrubs. Jumping Spiders have 360 degree eyesight. At night or when it is cool they hide in little cracks. Four small eyes help the spider notice when something is moving. They can jump 25 times their own body length. Most of the power comes from the back pair of legs.[link] 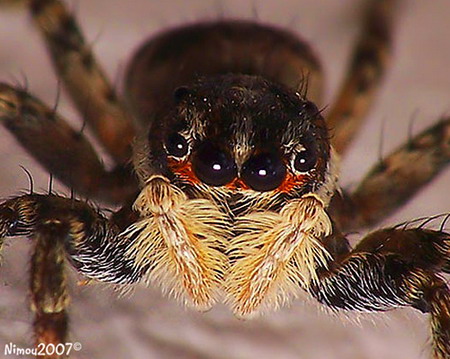 The spider species Argiope aurantia is commonly known as the Black and Yellow Garden Spider, Writing Spider, Bannana Spider or Corn Spider . They have distinctive yellow and black markings on their abdomens and a mostly white cephalothorax. Like other members of Argiope and almost all other spider species, they are considered harmless to humans.[link] 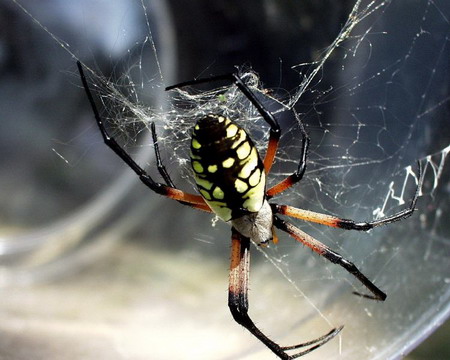 It uses its long front legs to rest on top of the water and detect vibrations caused by its prey, which can be insect lava, tadpoles or even small fish![link] 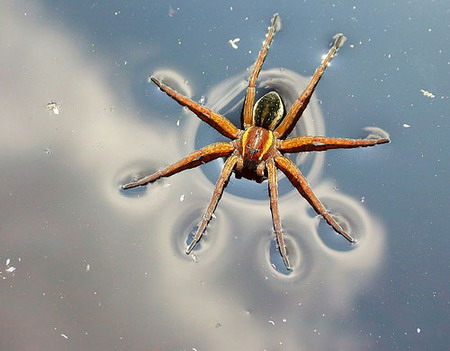 The European garden spider (Araneus diadematus) or diadem spider, also called the cross spider in Eastern Europe, is a very common and well-known orb-weaver spider in Western Europe. They are said to eat their webs each night along with many of the small insects stuck to it. They have been observed doing this within a couple of minutes. A new web is then spun in the morning.[link] 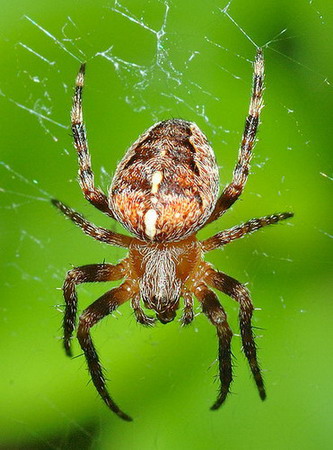 Lynx Spiders are hunting spiders that spend their lives on plants, flowers and shrubs. Nimble runners and jumpers, they rely on their keen eyesight to stalk, chase or ambush prey. Six of their eight eyes are arranged in a hexagon-like pattern, a characteristic that identifies them as members of the family Oxyopidae. They also have spiny legs. 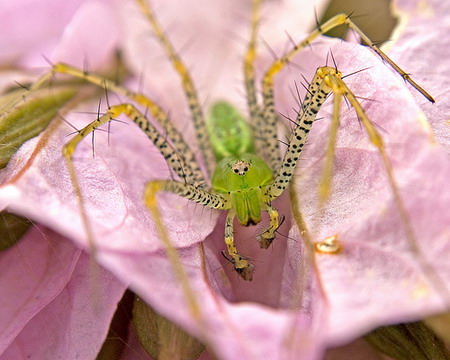 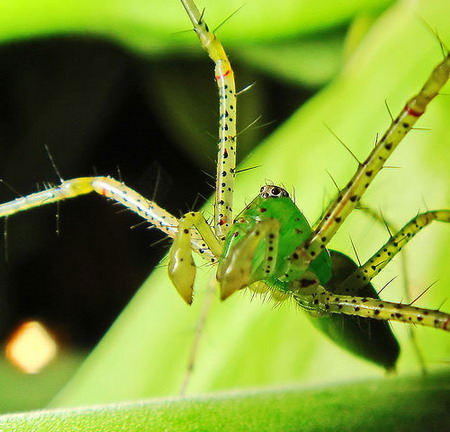 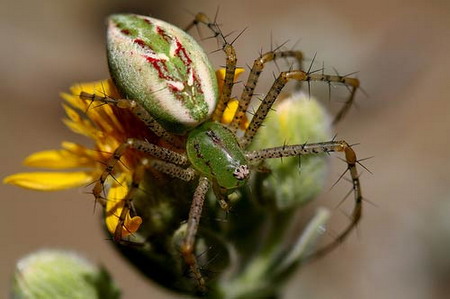 Leaf curling spider, is a common Australian spider found in urban areas as well as woodlands in the North-eastern, Eastern and Southern states.
They are distinguished by a curled leaf at the web’s centre. The species form pairs living together in the same leaf though at opposite ends of their shelter, even before mating at maturity.The female creates a separate curled leaf “nursery” hung in foliage nearby. 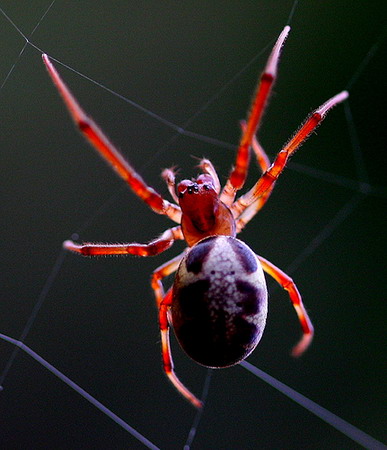 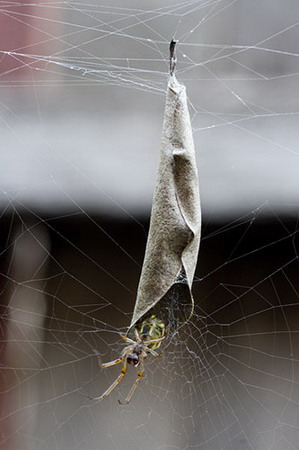 Austracantha minax is a distinctive Australian spider.
This species occurs throughout most of Australia. They like to make their webs in shrubby woodlands in large communities of spiders with each individual web connected together into a miniature spider city.Its bite is only mildly painful, with a temporary local reaction.[link] 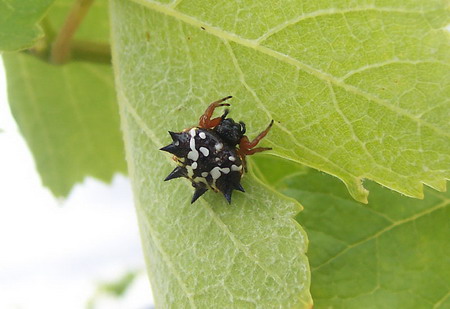 Austracantha minax is a distinctive Australian spider.
This spider is commonly known as the St Andrew’s Cross spider, due to the construction of bands of silk forming the arms of a cross. Termed web decorations or stabilimenta, these bands are thought to increase prey capture in this species, however, in other species they have been found to protect the spider against predators.[link] 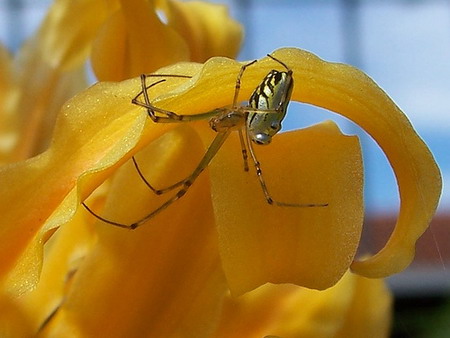 Austracantha minax is a distinctive Australian spider.
Spitting spiders catch their prey by spitting a fluid that immobilizes it by congealing on contact into a venomous and sticky mass. They can be observed swaying from side to side, in order to cover the prey in a crisscrossed “Z” pattern; each of two pores in the chelicerae emits half of the pattern. The spider usually strikes from a distance of 10-20mm and the whole attack sequence is over in a little under 1/700th of second. 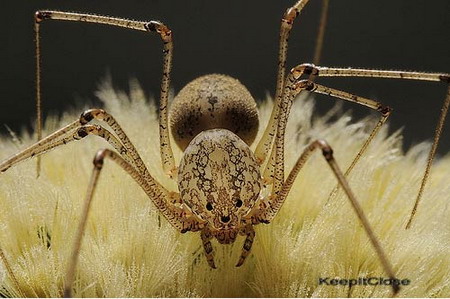 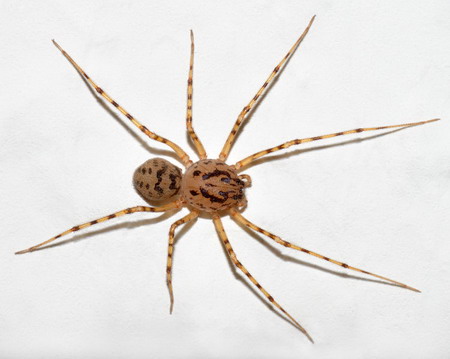 3 thoughts on “Something about the spiders”