Welcome to the Odd Animal Plant – our earth…Yes, it is on earth, not something alien species or 3d creation. 17 most unusual and weirdest animals … from forest and land animals to the animals from the deepest and darkest depths of the ocean. Some of these are so odd you wont even believe that something like that could actually exist. But believe me… they are really living around us. 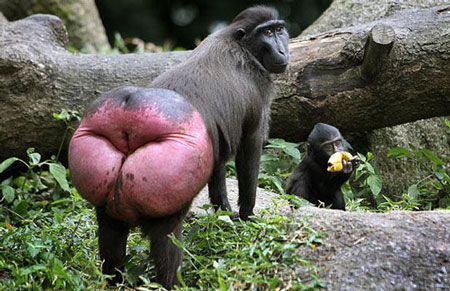 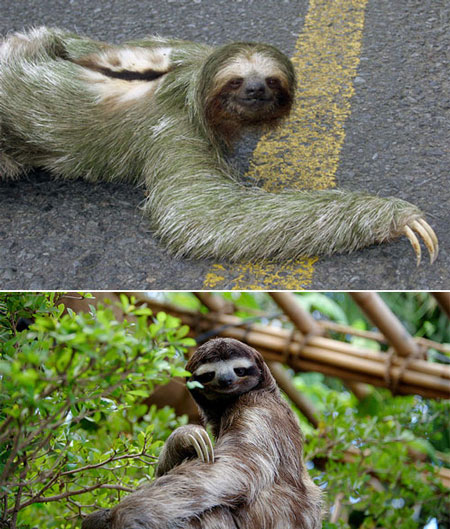 Sloths are extremely slow-moving mammals found in the rain forest canopies of Central and South America. There are two species of sloths:two-toed and three-toed. Most sloths are about the size of a small dog and they have short, flat flat heads. Not sure why..but the pictures make me thrilled… [Image source] 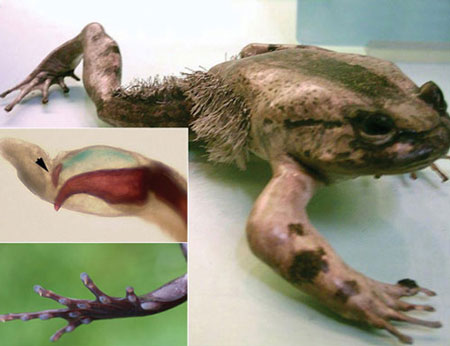 “Amphibian horror” isn’t a movie genre, but on this evidence perhaps it should be. Harvard biologists have described a bizarre, hairy frog with cat-like extendable claws. [Image source] 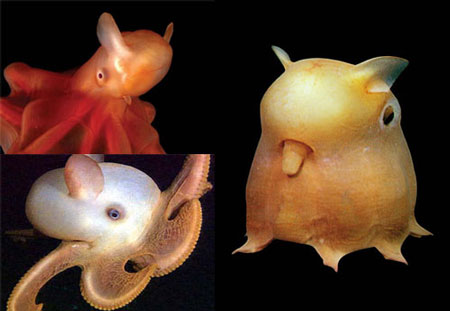 The octopuses of the genus Grimpoteuthis are also known as “Dumbo octopuses” from the ear-like fins protruding from the top of their head-like bodies, resembling the ears of Walt Disney’s flying elephant. [Image source] 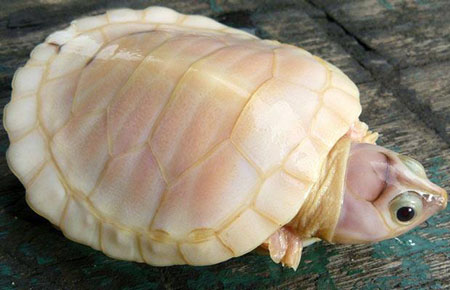 An albino turtle born at the Biological Reserve of Abufari, and presented by the Chico Mendes Institute for Biodiversity Conservation in Tapaua, Amazonia, Brazil [Image source] 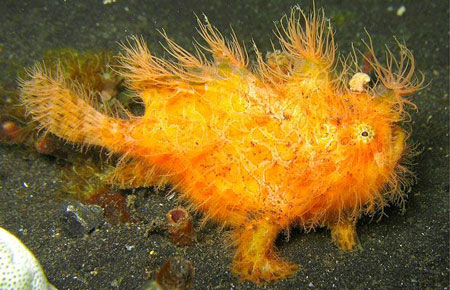 Hairy Frogfish, they inhabits rocky and coral reefs, on rocks, sand or rubble, and is also found in weedy estuaries along the east coast of southern Africa. Coloration is variable, often light yellow, orange, green, gray or brown with black stripes or elongate blotches, sometimes solid black. Frogfishes do not swim in the conventional way; instead, they “walk” on their pectoral fins or use ‘jet propulsion’. [Image source] 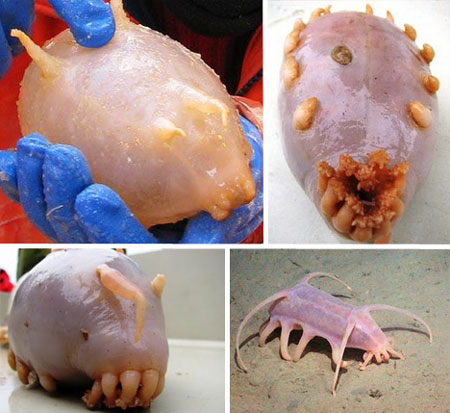 Seapigs live on, or just underneath, the bottom of the ocean and feed on the mud of the seafloor. Scientists haven’t yet worked out how they are such a successful deep-sea creature [Image source] 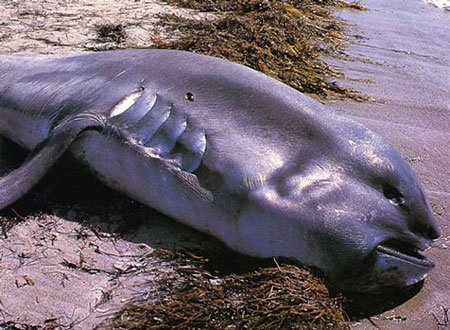 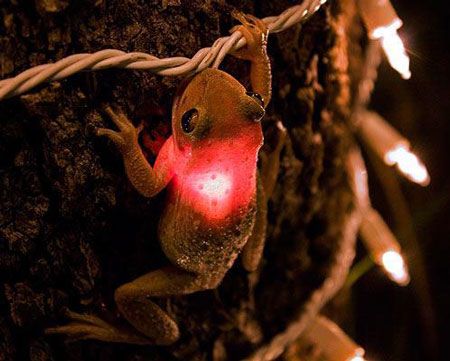 A hungry Cuban tree frog is all lit up after swallowing a decorative tree light in West Palm Beach, Florida [Image source] 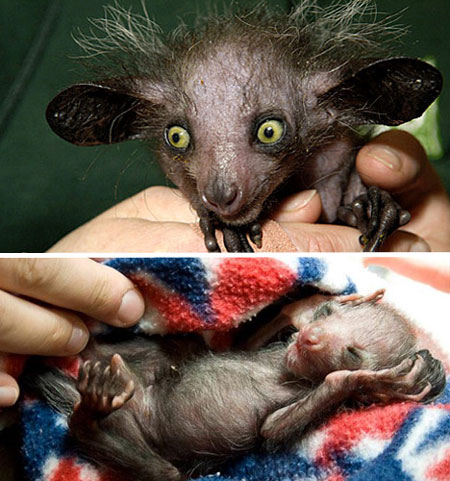 Few mammals are as weird looking as the endangered Aye-Aye, a lemur found only on the island of Madagascar, but – surprise! It’s actually a close relative of humans. With big protruding eyes, super-skinny fingers and a huge bushy tail, Aye-Ayes are pretty unique. Their bat-like ears allow them to detect insect larvae squirming inside trees, and they’ve also got a sweet tooth for coconut and sugar cane, which gets them in trouble with farmers. [Image source] 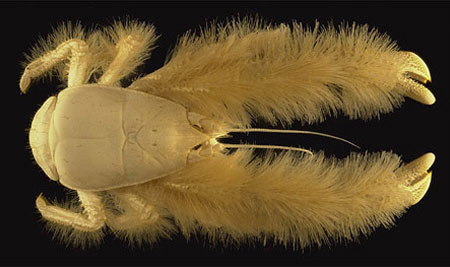 With its long, furry appendages, the newly-discovered Yeti Crab looks like some kind of sea sloth. It was discovered on the floor of the Pacific Ocean during a deep-sea diving expedition in 2006 and is so unusual that a new taxonomic family had to be invented for it. The Yeti Crab is blind and white, with fur that supports colonies of bacteria. It lives near hydrothermal vents 7,540 feet under the surface.[ Image source] 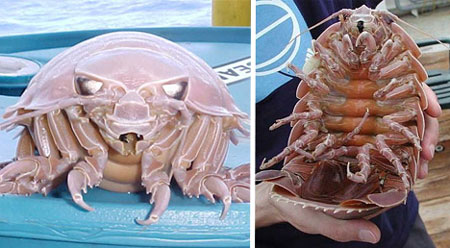 If you’re afraid of bugs, you’re really not going to like the Giant Isopod. It resembles nothing so much as a cockroach the size of a guinea pig, but it’s actually a crustacean related to shrimp and crabs.[ Image source] 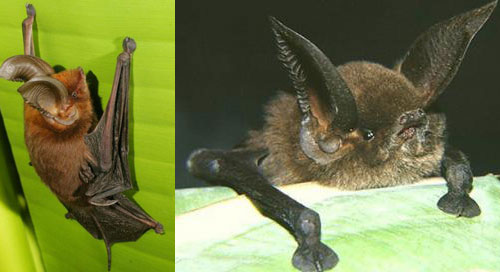 The Sucker Footed Bat is a bat named for its suction cup like feet that allow for it to grasp onto just about any surface. This type of bat is quite small and is identified by its feet, which contain the sucker like pads on both the thumbs as well as the soles of its feet.[ Image source] 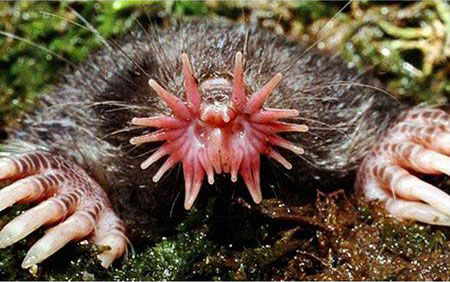 The star-nosed mole’s snout has 22 fleshy tentacles that are used to identify food by touch. Often found in North America, it lives in wet lowland areas and eats small invertebrates, aquatic insects, worms and molluscs. It is a good swimmer and can forage along the bottoms of streams and ponds.[ Image source] 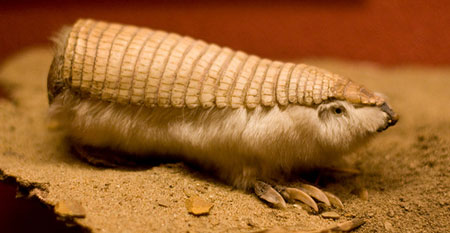 The smallest of the family of the armadillos, the Pink Fairy Armadillo (Chlamyphorus truncatus), is an endangered species. It exists in parts of Argentina in South America and is threatened by the destruction of its habitat and domestic dogs. This little digger can bury so fast that it can bury itself in a matter of seconds when it feels threatened. The armor plate functions as a cork to close the entrance to its burrow. They feed primarily on ants. [ Image source] 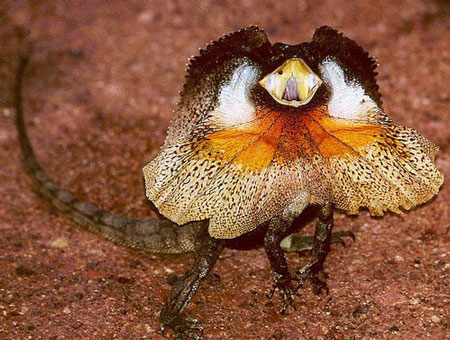 The frill-necked lizard, also known as the frilled lizard or frilled dragon, is a unique lizard found solely in northern Australia and southern New Guinea. Its name comes from the large frill around its neck, which usually stays folded against the lizard’s body. It is largely arboreal, spending the majority of the time in the trees. [ Image source]

Ways to Earn Money From Photography